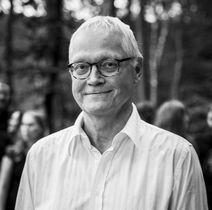 ​In 1991 Jens Johansen formed Vocal Line and has since then been the choir’s permanent conductor and focal point.
Jens Johansen is educated from the department of Musicology at the University of Aarhus and has later taken a musically theoretic and pedagogic exam at the Royal Music Academy, Aarhus. Today he works as an associate professor in musicology at the University of Aarhus.
Jens Johansen formed Vocal Line on the basis of a wish to create a vocal ensemble that would become able to take the lead of the developing of rhythmic choir singing in Denmark. At the very early stages the goal was to contribute to the construction of a stronger position for rhythmic choir singing, so that it would become perceived as concert music worth listening to. Also, the wish was to prioritise other elements than the ones solely made from entertaining dimensions. The starting point was Nordic choir music mixed with pop, rock and jazz.
Today Vocal Line and Jens Johansen are very well known in the circles of choir music all across the world. Jens Johansen is an often requested teacher and choir instructor, and has given courses and seminars to choir singers and conductors in several countries such as all the Nordic countries as well as Germany, the Netherlands, Spain, Italy, Hungary, Taiwan, Japan, Australia, USA and Brazil.
Throughout the years Jens Johansen has published countless compositions and arrangements to the delight of choir singers all over the world. He is a long-time member of the board of ‘KOR 72’ and has most recently been the principal organiser and chairman of the ‘Aarhus Vocal Festival’, the biggest festival for modern rhythmic a cappella music of the North.